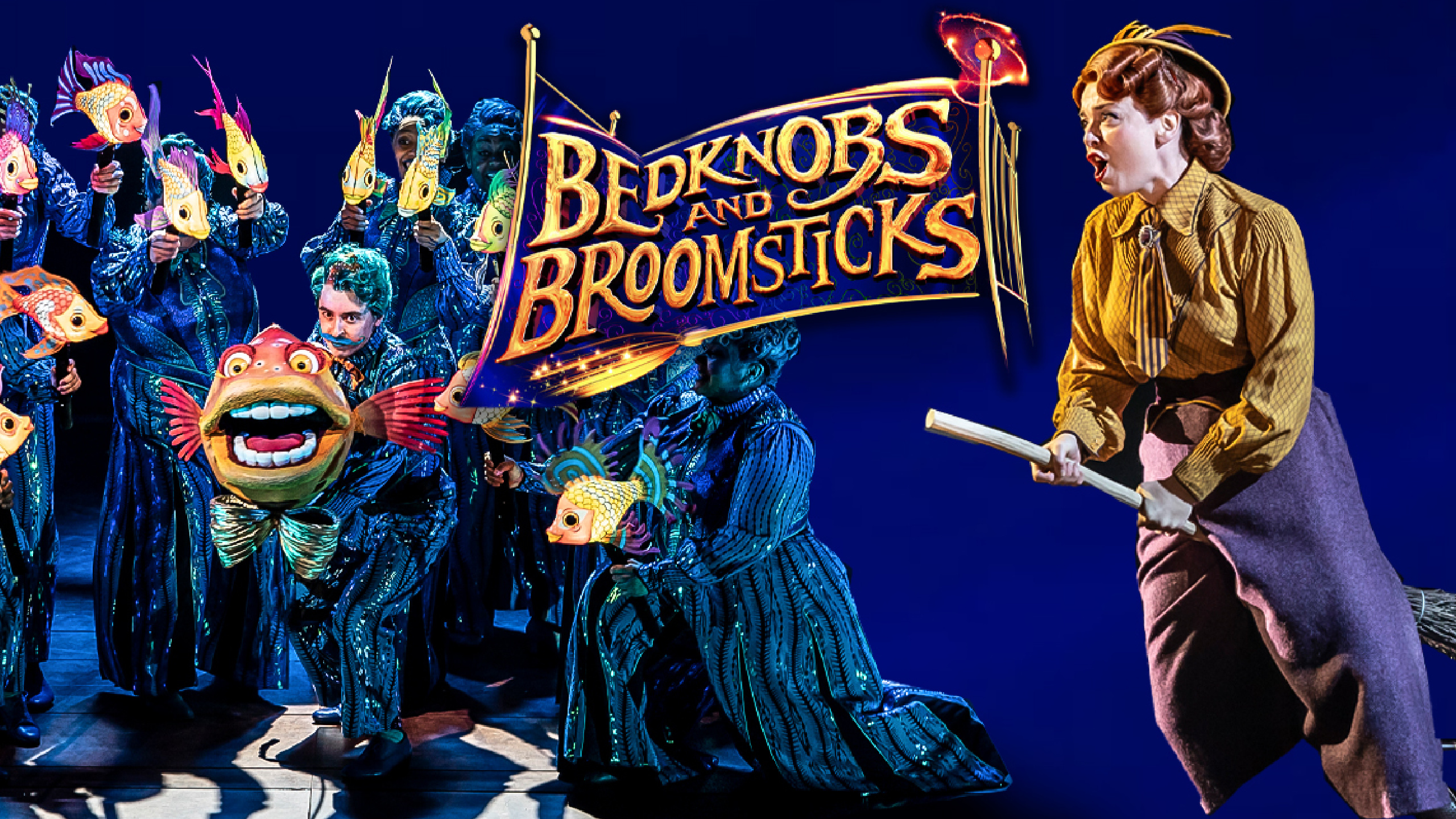 We managed to watch the musical when it arrived in Norwich and this is our review..

The Plot for Bedknobs and Broomsticks the Musical…

In August 1940, three children – Paul, Carrie and Charlie Rawlins are placed under the care of Miss Eglantine Price. This is after they’re evacuated from London following the death of their parents in a bomb attack. She agrees to the arrangement temporarily. However, the children try to run back to London, but they observe Miss Price attempt to fly on a broomstick, and they change their minds.

Miss Price, played by Diane Pilkington, lives in a remote coastal village. As an apprentice witch, she is learning witchcraft and sorcery because she had a vision of an invasion. In the film and musical, Miss Price is learning witchcraft to defeat the Nazis. To silence the children about her plans, she offers them a transportation spell. Miss Price casts a spell on a bedknob which only one of the children knows how it works.

She receives a letter from the Correspondence college of Witchcraft in London announcing its closure. This prevents her from learning the final spell. Mis Price convinces the children to use the magical bed and travel to London to locate Professor Emelius Browne.

In the film and musical, the bed serves as a flying carpet. Miss Price and the children fly off on the magical bed in search of a crucial spell that brings objects to life. Their first port of call is Emelius Browne (Charles Brunton), the magic professor.

The professor created the Correspondence College of Witchcraft. He used passages from an old book about Astaroth, a wizard. Upon revelation, the professor learns that the spells work. When Miss Price asks to see the book, Professor Browne takes them to an abandoned mansion.

As the children explore the old mansion, he shows Miss Price the book. The book is torn in half explaining why the professor closed the college of witchcraft. He tells her that he bought the book from a bookseller which prompts the quintet to travel to Portobello Road. From there, the quintet make trips to the bucolic countryside, a tropical island and the deep sea on the magical flying bed.

This production by Jamie Harrison and Candice Edmunds is genuinely jaw-dropping. Just how does Miss Price soar on her broomstick across the moon and how does the bed fly?! These stunts are fantastic and fun to watch.

Sadly, the beloved animated football scene is not present in the musical. Instead, they replaced it with a dance competition in the Briny Ballroom. The scene is complete with a chorus of fish puppets and blue sequined costumes. This allows for Emelius and Eglantine romance to blossom.

In the musical, puppets represent the animals. These puppets are beautifully and wonderfully designed by Kenneth Macleod. The directors, Candice Edmunds and Harrison spent a lot of time with the actors to ensure the old fashioned stage magic came to life.

They also altered the ending framing the musical differently. However, the show received positive reviews from different quarters. The Art Desk said, “Dazzlingly executed, the show is a triumph. Every penny of the ticket price is up there for us to see.” “A truly magical show. You’ll believe a bed can fly,” said Mail on Sunday.

It’s pleasing to say that Disney’s stage adaptation is better than the film. This adaptation is faithful to the original screenplay and even fleshes out some undeveloped parts. The musical has a tighter narrative arc and retains the key moments everyone has come to know and love.

Our thoughts on Bedknobs and Broomsticks the Musical…

We loved the Musical! the first half was slow paced but the second half made up for that! both our daughters (aged 9 and 10) enjoyed the musical but we did notice younger children in the audience were quite restless! due to this we recommend this musical for Children age 8 and above.

You can view all the tour dates for Bedknobs and Broomsticks and book tickets over at Disney Tickets.

The Got2Glow Fairy Finder is like Pokémon Go for Fairies!