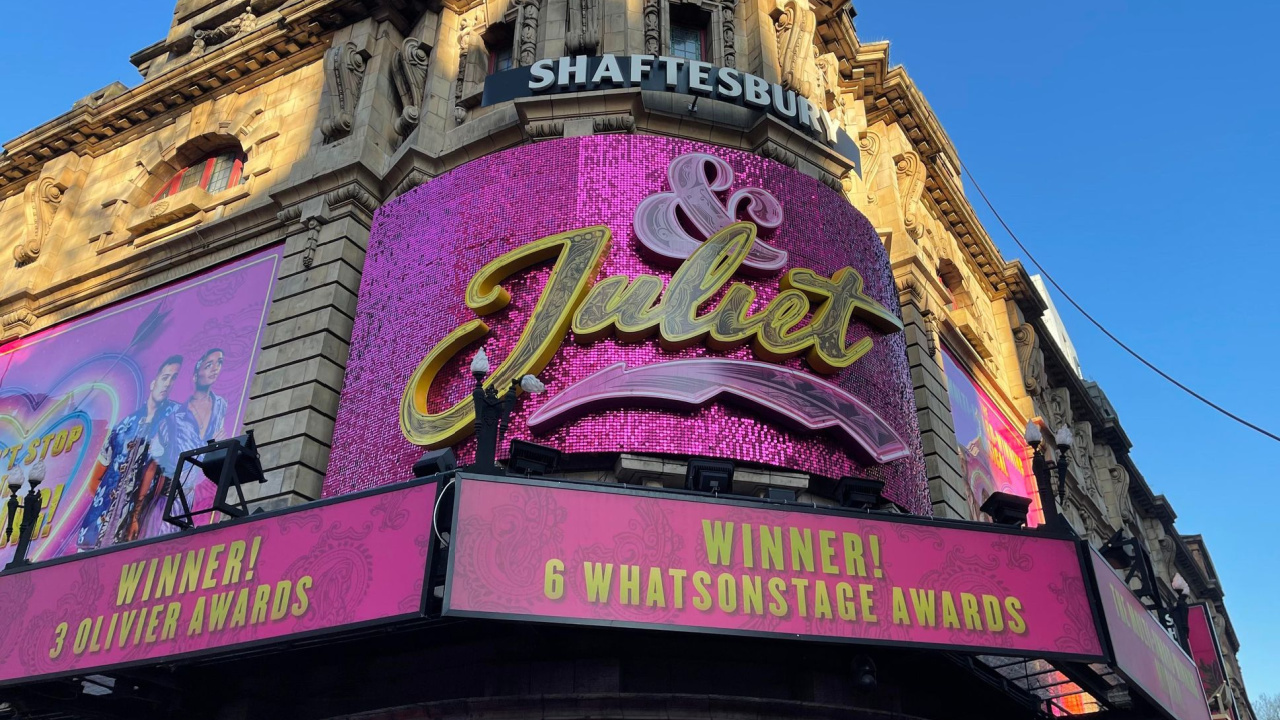 Romeo and Juliet is a tragedy written by William Shakespeare. The tale is about two star-struck lovers who fall in love but later meet an untimely demise. What if Juliet didn’t kill herself? Well, now you can find out in & Juliet.

I took my 10 year old daughter to see & Juliet at the Shaftesbury Theatre in London and we weren’t disappointed! this is our review to help other families who are planning to see the show!

When you arrive at the Shaftesbury Theatre there’s plenty of photo opportunities! They even have a dedicated photo wall (which makes you feel like you’re attending a premiere!).

If you are planning to see & Juliet with a child please pay attention to this part of my review! the stage is very high (and you will understand why when you see the show) we booked tickets for Row C in the Stalls (which is the second row in this production) and my daughter couldn’t see the stage (even with a booster seat). We went to the Box Office and they kindly moved our seats to Row K (which was perfect!) If you are planning to take kids to see & Juliet I recommend booking tickets in Row K and beyond.

What is & Juliet Musical About?

& Juliet is a musical that tells a different ending to William Shakespeare’s Romeo and Juliet. So, instead of death in the final scene, Juliet decides to live her life.

& Juliet is a play within a play, in Act One, the audience welcomes Shakespeare to the stage. He later introduces Anne Hathaway, his wife, who is visiting from Stratford-Upon-Avon. William has invited his wife to watch is brand new play ‘Romeo and Juliet’ but when William explains the ending Anne hates it! Anne convinces William to let her re-write the ending and that’s when the fun starts!.

I don’t want to spoil the Musical as this is one you have to watch!

Who Are The Creative Team at & Juliet?

The & Juliet Musical creative team includes Max Martin, the Swedish songwriter. His hit singles have propelled numerous artists into the limelight. They include Britney Spears, The Backstreet Boys, Taylor Swift, Katy Perry, Ariana Grande and many more. In terms of songwriters with Number One singles, he only falls behind John Lennon and Paul McCartney.

David West Read, a Canadian playwright, wrote the & Juliet book. His other works include The Great Pretender, The Dream of the Burning Boy and The Performers. He is also best known for serving as a writer on Schitt’s Creek, an award-winning Canadian sitcom.

Luke Sheppard is directing the musical. He has also directed In The Heights when it made its UK premiere. The show won three Olivier Awards and a Best New Musical nomination.

Besides the creatives above, the following cast bring the story alive.

Miriam trained at the Arts Educational Schools London and the Morgan Aslanoff Dance School. She starred in Hamilton as part of the original cast before making her professional debut in On The Town at the Regent’s Park Open Air Theatre. For her role in the show, received Best Actress in a Musical in 2017.

She has also been a soloist in London Musical Theatre Orchestra’s, A Christmas Carol, and in the Ljubljana Music Festival in Slovenia. In & Juliet Musical, she plays Juliet.

Cassidy has made several appearances in theatre shows. She played Aldonza in Man of La Mancha, and Carole King in Beautiful: The Carole King Musical. She also starred as Florence in Chess, Ruth in Dessa Rose, Maggie Saunders in Lend Me A Tenor and Susan in Tick, Tick….Boom! She has a solo album titled Cassidy. In & Juliet Musical, she plays Anne, Shakespeare’s wife.

Oliver Tompsett is a British singer and actor. He is best known for his role as Galileo in We Will Rock You, a West End Smash hit. He has also portrayed Fiyero in Wicked, another West End production.

He made his professional debut in 2002 in Our House, a musical directed by Matthew Warchus. His subsequent stage appearances include Mamma Mia directed by Phyllida Lloyd and Notes From New York. In & Juliet Musical, he plays Shakespeare.

Jordan first made his theatre debut in Bat Out Of Hell as Strat and later Taboo as Marilyn. Trained at Mountview Academy of Theatre Arts, he appeared in several TV shows. They include Proms in the Park, Cilla and Cucumber. He has also starred in films including Harry Potter and the Order of Phoenix as a Hogwarts schoolboy and How Not To Disappear Completely. In & Juliet, Jordan plays Romeo.

Melanie is a former Calypso singer from Trinidad and an actress best known for her roles in Casualty and EastEnders. Besides her life on screen, she also stars in theatre and amassed several credits to her name.

Her roles in theatre include Mother in Clear Water, Agness Brown in Passports to the Promised Land, and Rose Red in Snow Black. She also starred as Ms Sherman in Fame: The Musical and in Ragtime by Sonia Friedman Productions. In & Juliet Musical, she plays Nurse, one of Juliet’s friends.

Other cast members include:

Alex Thomas-Smith as May

What Are The Songs in & Juliet?

& Juliet features songs written by Max Martin and sung by popular artists such as Ariana Grande, Britney Spears and many more. As such, this is a high energy musical that will leave audiences walking with a spring in their steps.

The top five songs used in the musical include:

Larger Than Life by Backstreet Boys

This song kicks off the pop fuelled show in a true concert style fashion. Released in September 1999, it was the second single from their third album, Millennium. The song was a thank you to their fans for their devotion and encouragement.

I Want It That Way – Backstreet Boys

The song, I Want It That Way, is the lead single from their third album. Released in April 1999, the ballad talks about a relationship strained by matters of physical and emotional distance.

Baby One More Time is a chart-topping hit by Britney Spears. Released when she was 16 years, the song turned her into an overnight success. Max Martin, the Swedish songwriter, penned the lyrics.

Show Me The Meaning of Being Lonely – Backstreet Boys

Written by Max Martin and Herbie Crichlow, Backstreet Boys released the song in December 1999. Taken from the third album, Millennium, it received favourable views from critics. In fact, they commended it for its melody and lush orchestration.

Domino is an electro-pop and dance-pop song by Jessie J, an English songwriter and singer. In the UK, the song became a number one single and peaked at number 6 on the Billboard Hot 100.

Other songs in the musical include:

Is & Juliet Musical Suitable for Kids?

& Juliet is for ages 6+. However, the show does contain some adult language and themes (so this is something parents should be aware of). One of the songs towards the end of the show contains the ‘F Word’ several times so just be prepared!.

How Long is & Juliet Musical?

The show is amazing! I highly recommend going to see the show with your family! the set is state of the art and you will be blown away with some of it’s features! overall it’s a 5 star production which you can’t afford to miss! Book your tickets today!