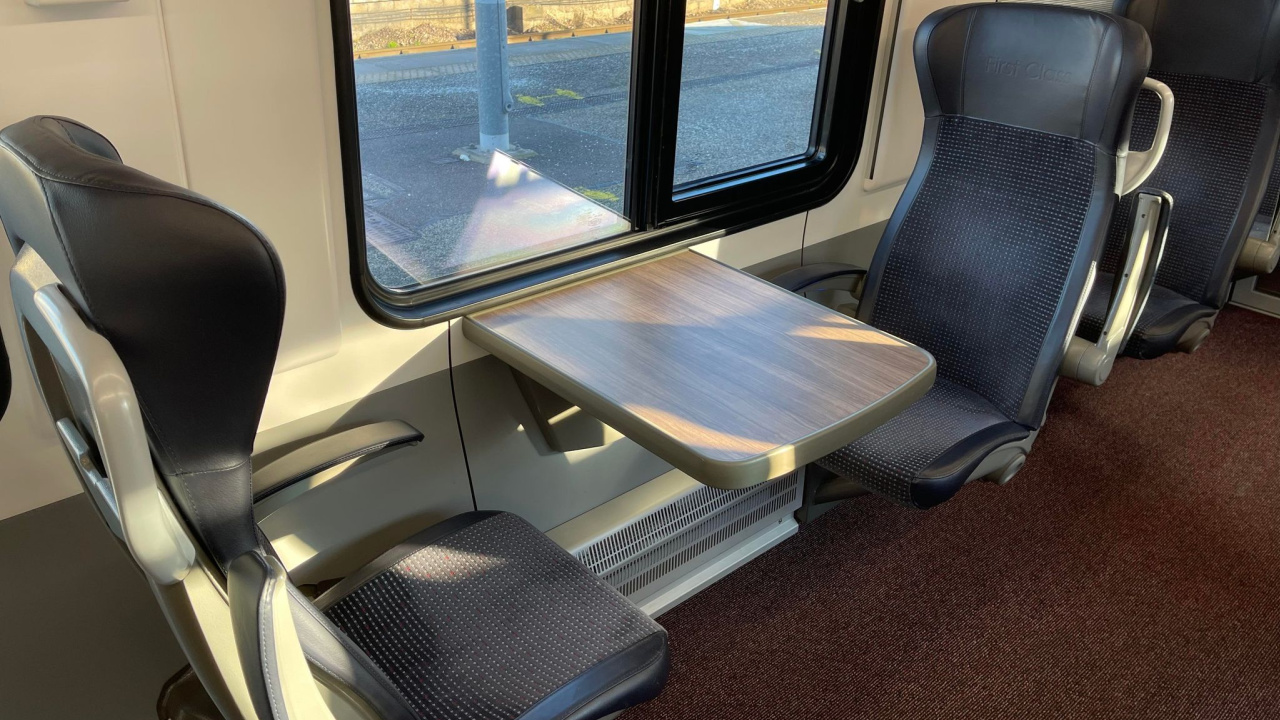 For my recent theatre trip to London I decided to upgrade my outbound journey to Greater Anglia First Class (for the additional cost of £27).

The Greater Anglia website boasts that First Class is superior to standard class (and offers benefits such as extra leg room, a table seat & Complimentary refreshments from the Café bar) but is it worth upgrading? here’s my review…

For the outbound journey from Norwich to London the Greater Anglia First Class carriage is at the very end of the train (so make sure you plan plenty of time to walk to the end of the platform).

The Greater Anglia First Class Carriage was very quiet and we got the benefits of extra legroom, a table and 1 USB Port & 1 Plug Socket per seat.

On top of the extra legroom, a table at every seat and power sockets. Greater Anglia First Class Benefits include Wi-Fi and Complimentary refreshments (this is where my experience went downhill!)

First of all the Wi-Fi was extremely poor! the connection would drop in and out (so I ended up using my mobile data) during my Journey.

The complimentary refreshments were a MASSIVE disappointment! The Café Bar they had loads of snacks and drinks to choose from BUT unless you want Tea, Coffee, Hot Chocolate, Water or Biscuits it will hit your purse strings!…

When I approached the Café Bar there was a short queue of First Class passenger’s (all were asking for a packet of Crisps as they thought they would be included in the price) but they were quoted £1.10 per packet! So many passengers in the queue got their hot drink and then muttered under their breath how they wish they didn’t pay extra for first class.

When it got to my turn and I asked which snacks were included in the price of my first class ticket I was offered a choice of Lemon, Ginger or Chocolate & Vanilla Biscuits. I asked for a pack of Chocolate & Vanilla Biscuits but when the staff member handed them to me I was shocked at how tiny they were! I asked if I could have a extra packet (which he didn’t seem too impressed about!) but at this point I was extremely hungry!.

Along with the biscuits I ordered 2 cups of Coffee (which I can officially say was the WORSE Coffee I’ve tasted in my life!) it was basically sugar water! and the biscuits weren’t anything special!.

Because I was hungry I ended up buying a sausage roll and packet of Crisps (which came to £3.10) which isn’t too bad for ‘train prices’ but I was starting to regret paying an additional £27 to upgrade to first class.

Because my outbound Greater Anglia First Class Journey was so disappointing I decided to opt for Standard Class for my return journey (so I could compare the difference!).

My Standard class ticket from London to Norwich was £35 (First Class would have cost an extra £42!) at first I was concerned that I wouldn’t find a tablet seat (as I was travelling on a Peak’ Service) but I was pleasantly surprised!

Even though there’s not as many table seats in Standard Class I managed to find quite a few empty ones.

When I got to my table seat, I noticed these differences from First Class…

Wi-Fi is still free (in both Standard and First Class) but like I mentioned previously it’s very unreliable.

Overall my journey in Standard Class was so much better than First Class! the new Greater Anglia trains provide comfort in each class BUT the price difference between them is insane! if you’re travelling for Business (and the price of your ticket is being covered by your employer) by all means travel in first class! but if you are like me and just heading to London for a Theatre Trip, I recommend you opt for Standard Class and save your money as Greater Anglia First Class isn’t worth the additional cost!.