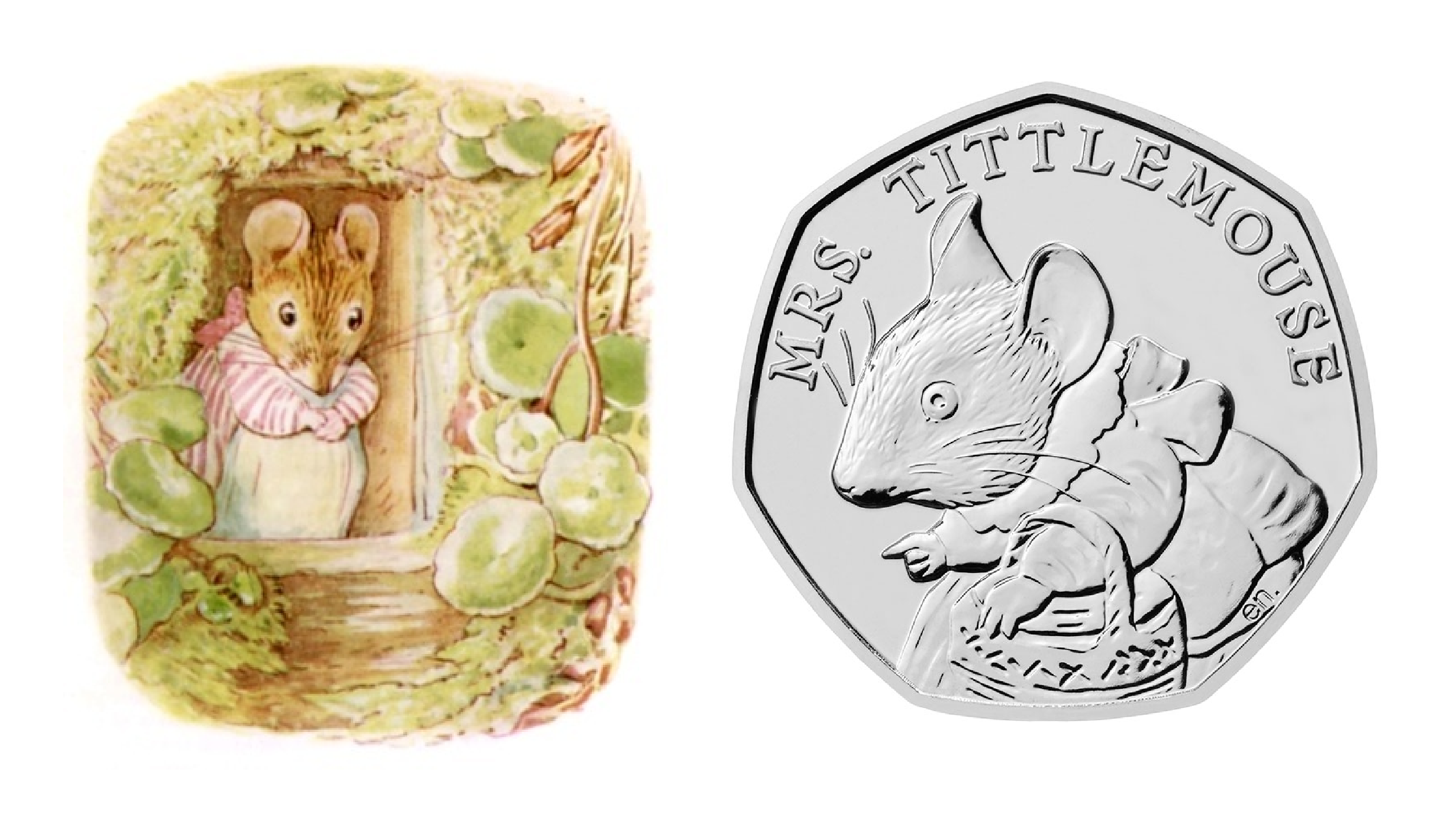 How much is the Mrs Tittlemouse 50p Worth?

Beatrix Potter, an English writer of one of the most beloved children’s books – The Tale of Peter Rabbit – was immensely talented. As a woman ahead of her time, she wrote and illustrated more than 28 books, including her 23 Tales. To celebrate 150 years since the author’s birth, the Royal Mint released the Mrs Tittlemouse 50p Coin. This is the fourth and final coin in Beatrix Potter’s 50p coins.

Who is Mrs Tittlemouse?

Mrs Tittlemouse is a character from Beatrix Potter’s children’s book – The Tale of Mrs Tittlemouse. Published in 1910, the character is a tidy little mouse constantly dusting and sweeping the soft sandy floors. She continually cleans up after insects visit her home.

The character debuted in 1909 in a small role in the Tale of the Flopsy Bunnies. The following year, Beatrix Potter gave Mrs Tittlemouse a tale of her own. As a woodmouse living in a funny house beneath a hedge, poor Mrs Tittlemouse spends her days keeping her dwelling tidy. Her home has yards and yards of nut cellars, seed cellars, passages amongst the roots of a hedge.

She also has a kitchen, a pantry, a larder, a bedroom and a parlour. Mrs Tittlemouse keeps her brush and dustpan next to her little bed. Insect intruders leave dirty footprints on the floors. A lost beetle left muddy footprints, and a spider leaves bits of cobweb. Her life is already complicated from the demands of her ageing parents, but she has to keep her house tidy continually.

Today, you can get a 2018 50p coin with Mrs Tittlemouse portrait.

When Was the Mrs Tittlemouse Coin Released?

The Mrs Tittlemouse 50p coin is the third rarest from Beatrix Potter’s collection. The Royal Mint released the 50p coin in circulation in 2018 to celebrate 150 years since the birth of Beatrix Potter.

How Many Mrs Tittlemouse coins are in Circulation?

Struck by the Royal Mint, there are 1.7 million Mrs Tittlemouse 50p coins in circulation. The reverse of the 50p coin features Mrs Tittlemouse, the house proud little wood mouse holding a basket on her way to the market. Designed by Emma Noble, it’s certified as superior Brilliant Uncirculated quality. This sets the coin apart from those you may find in your change.

The obverse features a definitive portrait of Her Majesty Queen Elizabeth II by Jody Clark. Made of Cupro Nickel, the coin has a diameter of 27.30 mm and weighs 8 grams.

How Much Is the Mrs Tittlemouse 50p Worth?

While it’s not a guarantee that your coin will sell for as much, coin collectors will often pay more if the coin is in good condition. The rarest coin we have come across is the Kew Garden 50p coin. Only 10,000 of these are currently in circulation. As the most sought after, they can fetch up to £160 for a coin in average condition.

What Is the Value of the Mrs Tittlemouse 50p?

The value of the Mrs Tittlemouse 50p coin is only worth what coin enthusiasts and collectors are willing to pay for it. As earlier said, if the coin is in good condition, the sale price will be high. Unfortunately, if the coin is in average condition or damaged, it may not sell more than its face value.

Where Can You Sell the Mrs Tittlemouse 50p Online?

There are several online platforms where you can sell your Mrs Tittlemouse 50p coin and others. Examples include:

With Facebook Marketplace and Groups, you’ve to meet the buyer. We recommend making the exchange at a police station parking space. This is because there are CCTV cameras. Do not share your bank account, credit card or debit card details online.

While the Mrs Tittlemouse 50p coin is not the rarest coin from Beatrix Potter’s collection, it’s still one of the most sought after coins. If you’ve one in your coin collection, piggy bank or pocket, you’re sitting on a gold mine.

How to Rent Out Your Driveway to Boost your Income