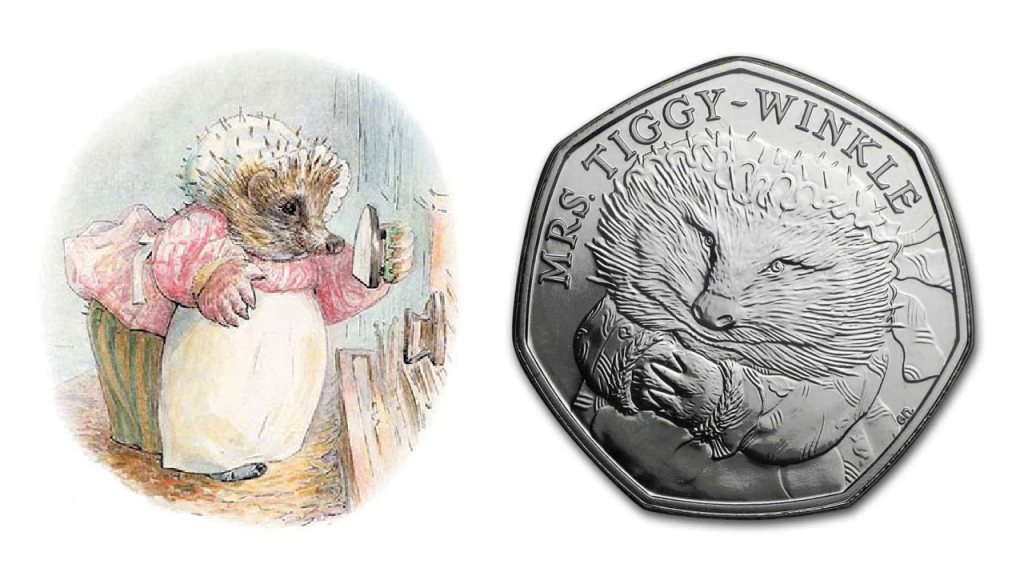 How much is the Mrs Tiggy Winkle 50p Worth?

In 2018, the Royal Mint honoured Beatrix Potter by releasing a series of 50p coins. This was to commemorate the 150th anniversary of Beatrix Potter’s birth, a gifted author and artist. Each coin features Potter’s much-loved pet hedgehog, Mrs Tiggy Winkle. The conscientious hedgehog on the 50p coin is in her washerwoman petticoat and dress.

Who is Mrs Tiggy Winkle?

Mrs Tiggy Winkle is a friendly and kind-hearted washerwoman who is a hedgehog. As the main protagonist from Beatrix Potter’s “The Tale of Mrs Tiggy Winkle”, the hedgehog washerwoman lives in a tiny cottage. The cottage is in the fells of the Lake District.

The character “Mrs Tiggy Winkle” was based on Potter’s pet hedgehog, Mrs Tiggy Winkle and Kitty MacDonald, a Scottish washerwoman. Both were inspirations for the heroine. Potter’s family employed MacDonald for eleven summers. At the time, the family was vacationing in the Scottish Highlands.

She (Potter) described Kitty MacDonald as a small, round and suntanned woman with small, dark eyes. She wore a white cap and several petticoats. The hedgehog was also one of Beatrix Potter’s positive creations. Mrs Tiggy Winkle became a subject of considerable merchandise. This includes porcelain figures, nursery ware, and the 50p coins.

When Was the Mrs Tiggy Winkle 50p Coin Released?

The Beatrix Potter “Mrs Tiggy Winkle” coin was one of the five 50p coins released by the Royal Mint in 2016. Designed by Emma Noble, the coin shows the paws of the hedgehog clasped and her eyes closed. You can instantly recognize the prickles too.

Emma Noble is a coin engraver and designer who brought children favourites to life with her colourful designs. She has worked at the Royal Mint for more than two decades and was the reverse designer of the 50p coin. At the Royal Mint, she worked on other pieces commemorating the Remembrance Sunday and Diamond Jubilee, among others.

Jody Clark, another engraver at the Royal Mint was the obverse designer.

How Many Mrs Tiggy Winkle 50p Coins Are in Circulation?

The number of Mrs Tiggy Winkle coins in circulation are 8,800,000. Made of Cupro-nickel, each coin weighs 8 grams and has a diameter of 27.3 mm. The coin’s obverse depicts Queen Elizabeth II’s portrait, while the reverse shows Mrs Tiggy Winkle.

The silver proof version of the coin is typically coloured while the uncirculated is not. As the fourth coin in a five-coin series, this is a limited edition. As such, it’s strictly one coin per household. The maximum coin mintage for the coloured coin was 16,000. It has a diameter of 27.30 mm and weighs 12 grams.

How Much Is Mrs Tiggy Winkle 50p Worth?

The Mrs Tiggy Winkle coin is a favourite among collectors. In fact, it remains very much in demand despite the more than 8.8 million coins in circulation. According to value based on more than 190 sales on eBay UK, the coin’s price is between £1.23 and £1.69 for a good condition circulated 50p coin. The midpoint price for the Mrs Tiggy Winkle 50p coin is £1.35.

On eBay UK, the highest a Mrs Tiggy Winkle 50p coin sold to date is around £100. This was the coloured version. To find out what the coins are selling for, check out the sold pages on eBay UK rather than the for sale pages.

What Is the Value of the Mrs Tiggy Winkle 50p?

The value of a coin is always related to its condition. If it’s in good circulated condition with a few contact marks but still has the original price, the coin will fetch a high price. This is unlike a battered coin. The Mrs Tiggy Winkle coin is available as Brilliant Uncirculated. As such, it’s produced to a higher standard with no scratches and marks.

Where Can You Sell the Mrs Tiggy Winkle 50p Online?

If you’ve a Mrs Tiggy Winkle commemorative coin, you have the choice of adding it to your Beatrix Potter coin collection or selling it. You can sell it on online auction sites such as eBay, Gumtree and the Facebook Marketplace.