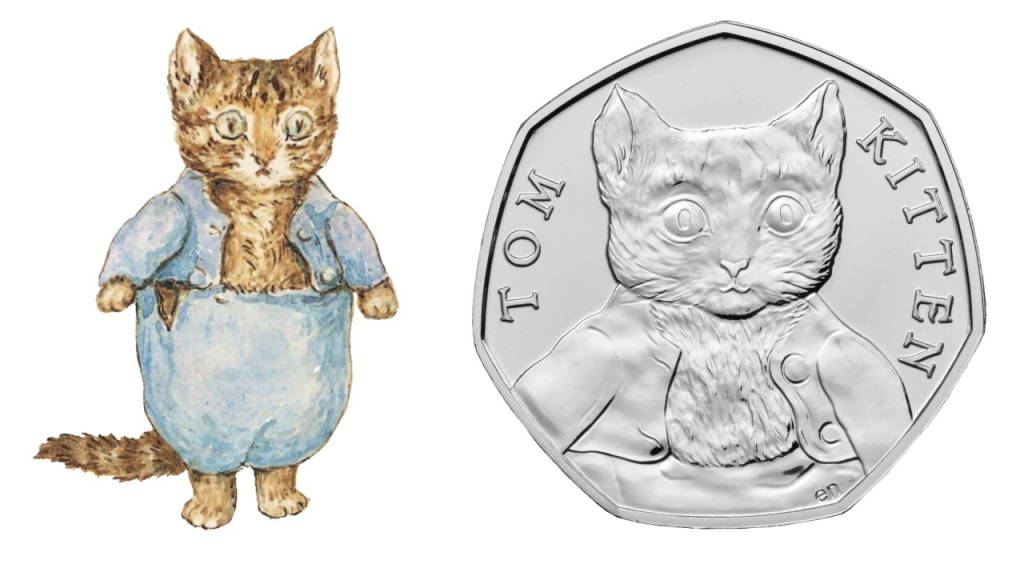 How much is the Tom Kitten 50p Worth?

It’s been more than five decades since the launch of the first 50p in 1969. Since then, thousands of these seven-sided coins have sold more than face value, including Potter’s coin collection. One of the most popular 50p coins from this collection is the Tom Kitten coin.

Who is Tom Kitten?

Tom Kitten is a character from Beatrix Potter’s book “The Tale of Tom Kitten.” As one of the most loved animals from Potter’s children tales, work began on Tom Kitten in 1906. Potter based the story on Hill Top Farm, where she was living. In fact, all illustrations depict the house’s interior, the gate at the front of the house, path and gardens.

The story is about Tom Kitten, a naughty kitten, his two little sisters, and his mom – Mrs Tabitha Twitchit. The author tells the story of Tom Kitten, who, alongside his sisters, dressed up ready for their mother’s party. Mrs Tabitha Twitchit sent the kittens to play in the garden. But they failed dismally by not keeping their clothes clean. They eventually lost their clothes to the passing Puddle-ducks and failed to attend their mom’s party.

In September 1907, twenty thousand copies of the book got released. Beatrix Potter released a painting book under Tom Kitten’s name.

Over the years, Tom Kitten and other characters from the book have been subjects of various merchandise. This includes plush toys and porcelain figurines. Today, the Tale of Tom Kitten is a beloved children’s book translated and published in several languages.

When Was the Tom Kitten 50p Coin Released?

Issued to celebrate Potter’s 23 children tales, this coin was also released alongside other coins:

Due to the popularity of the Beatrix Potter coin collection, the Royal Mint released two subsequent series of Tom Kitten coins in 2017 and 2018.

How Many Tom Kitten 50p Coins are In Circulation?

The obverse features the fifth portrait of Her Majesty Queen Elizabeth II. Jody Clark designed the obverse. Issued in the UK, each coin weighs 8 grams and has a diameter of 27.3 mm.

How Much Is the Tom Kitten 50p Worth?

A good condition circulated Tom Kitten coin goes for £3 and £5. On average, the coin sells for £3.80 based on more than 185 sales on eBay UK. On Amazon, the Change Checker store sells the Tom Kitten 50p coin for £3.85. As one of the most sought after coins from the Potter collection, one of Tom Kitten’s coins sold for £600.

Where Can You Sell the Tom Kitten 50p Online?

eBay is one of the most popular online marketplaces where you can sell your Tom Kitten 50p coin. The others are the Facebook Marketplace, Facebook Groups and Gumtree. On Facebook, you can join local coin groups where you can buy, sell or swap rare coins.

The Tom Kitten 50p coin is the first coin range in the UK to feature Tom Kitten, the naughty but playful character from Beatrix Potter’s tale. With these coins, some people are willing to pay a small premium to complete their collection. If selling a Tom Kitten 50p coin, make sure it’s in good condition and aim for the high range value.