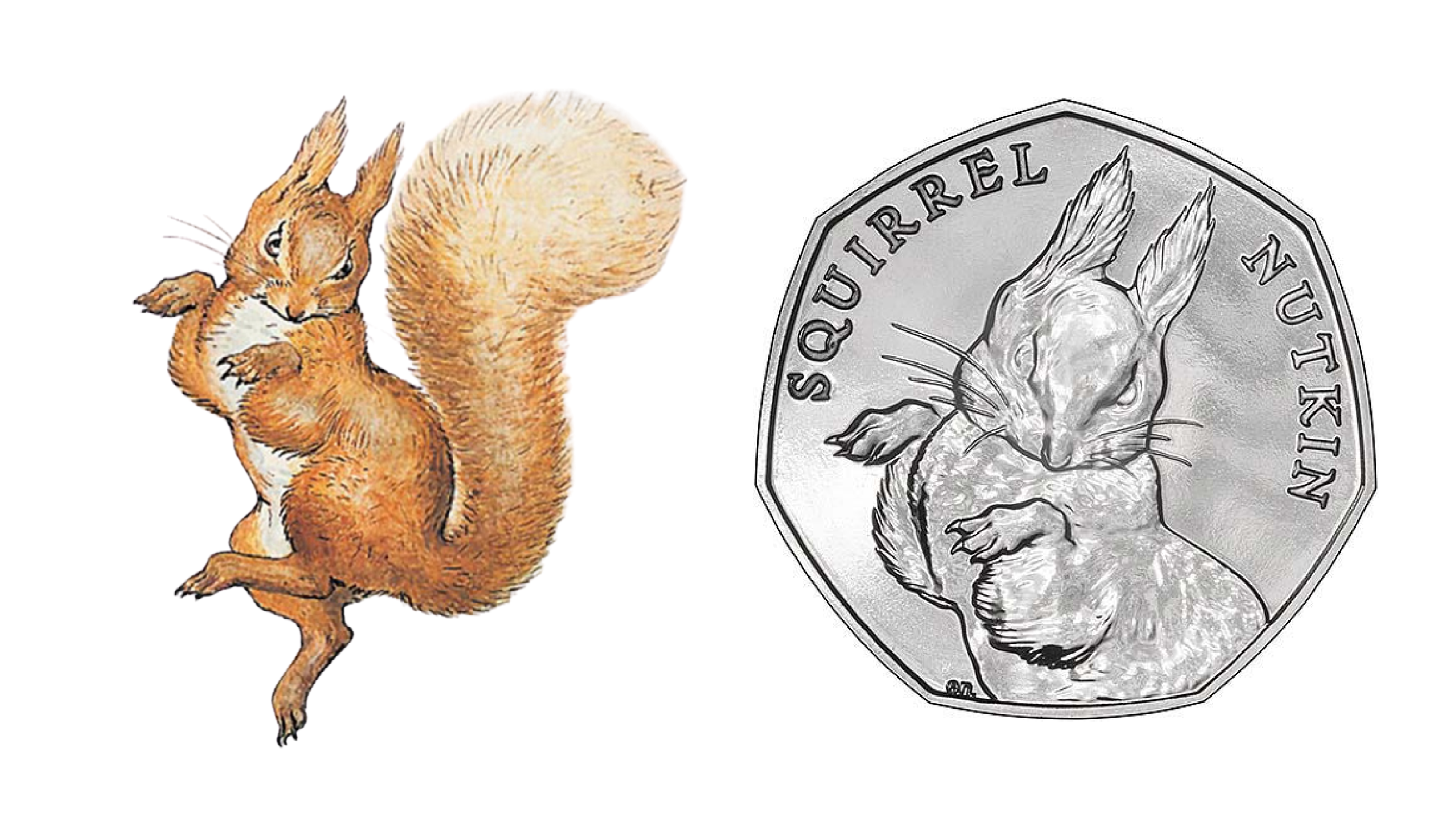 How much is the Squirrel Nutkin 50p Worth?

Beatrix Potter is one of Britain’s best-loved authors. To celebrate her 150th anniversary, the Royal Mint is honouring her with the Squirrel Nutkin 50p coin. This special edition coin is one of the five 2016 coins, and it comes in a Brilliant Uncirculated finish.

Who is Squirrel Nutkin?

Squirrel Nutkin is a little red squirrel from Potter’s “The Tale of Squirrel Nutkin.” First published in 1903, the story is about the impertinent squirrel and his narrow escape from Old Brown, an owl. The book followed the publication of “The Tale of Peter Rabbit” which was an instant hit.

In the book, Squirrel Nutkin, his many cousins and brother, Twinkleberry, sail to Owl Island. They use little rafts constructed of twigs. They offer Old Brown, the resident owl on the island, a gift on arrival at Owl Island. Upon giving the owl the present, they ask to collect nuts from the island.

Old Brown permits the squirrels to collect nuts. But Squirrel Nutkin starts dancing impertinently while singing a silly riddle. After several days of teasing the owl, Nutkin lost half of his tail. This is after Old Brown seizes him and tries to skin Nutkinl alive. From then on, Squirrel Nutkin got angry every time he heard a riddle.

This impish squirrel has found a place in the hearts of many people, and now the character is currently captured in detail on a 50p coin.

When Was the Squirrel Nutkin 50p Coin Released?

The Royal Mint issued the coin in 2016 to celebrate the playful character from the “Tale of Squirrel Nutkin. As the third released 50p coin in the Potter 2016 series, the Squirrel Nutkin is one of the scarcer coins from the series.

For over 50 years, the humble 50p, one of the first seven-sided coins, is no stranger to controversy. In the 60’s, people referred to the coin as a monstrous metal piece. Today, Beatrix Potter characters, the Paddington Bear and others all feature on different 50p coins.

How Many Squirrel Nutkin coins are in Circulation?

There are 5 million Squirrel Nutkin 50p coins in circulation. The reverse of the coins shows Squirrel Nutkin. Designed by Emma Noble, the rogue but lovable character is at the very heart of the coin. Instantly recognisable, you can see his whiskers and bushy tail. The uncirculated version is not coloured, but the silver proof version has colour.

The obverse shows Jody Clark’s portrait of Her Majesty Queen Elizabeth II. Both Jody Clark and Emma Noble are no strangers to the world of coin designs. As engravers, they’ve helped create several coins. This includes coins commemorating the Queen’s diamond wedding anniversary.

How Much Is the Squirrel Nutkin 50p Worth?

On eBay UK, the coin is around an average of £1.50. With 5 million Squirrel Nutkin coins in circulation, it’s common to find the coin. But as coin enthusiasts keep adding them to their collections, less will remain. Before you know it, those in excellent condition will go for hundreds of pounds.

What Is the Value of the Squirrel Nutkin 50p?

The Squirrel Nutkin 50p coin has a face value of 50p, but coin collectors currently pay £1.66 to own one of the coins. Recent sales on eBay UK show that the coin achieved a price range of £1.50 to £3. This is based on a sample of more than 1,400 sold items.

On eBay, one lucky user sold an uncirculated 2016 Peter Rabbit coin for £595. In another eBay listing, another user sold a similar coin in colour for £535. If you’re lucky, you could sell your Squirrel Nutkin 50p coin in excellent condition for up to £100.

Where Can You Sell the Squirrel Nutkin 50p Online?

There are several coin groups online interested in collecting rare coins. One of those platforms where you can sell your Squirrel Nutkin 50p is eBay UK. The platform has more than 22 million active users in the UK. Besides eBay, you can sell your coins on the following platforms:

The Beatrix Potter 2016 coin series are among the most sought after. These limited edition coins depict the character’s from Potter’s popular children’s stories. Although there are five million Squirrel Nutkin coins, they can fetch a lot of money at auction if kept in excellent condition.

15 Second Hand BookShops in London you Need to Visit