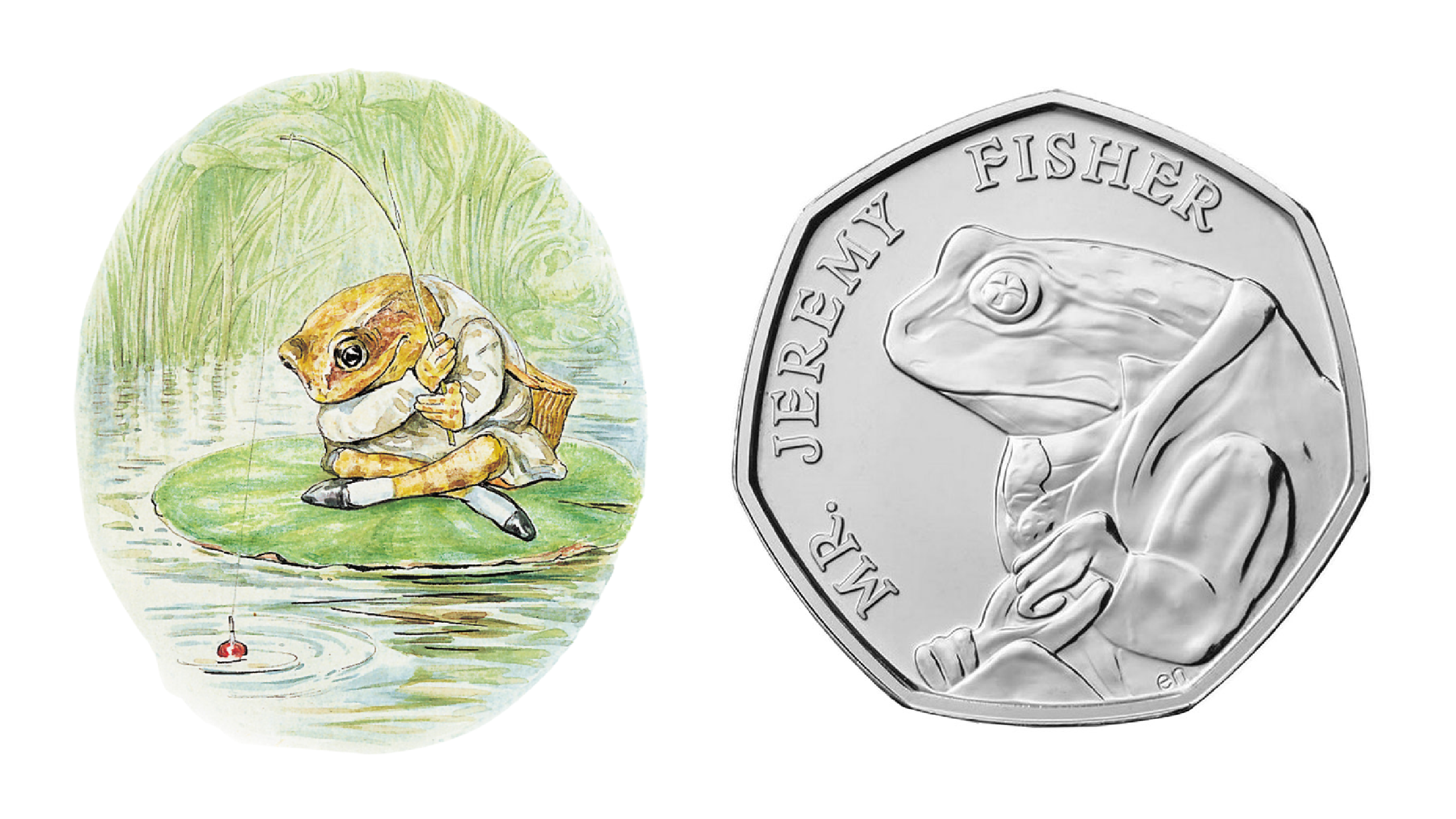 How much is the Jeremy Fisher 50p Worth?

The Tale of Peter Rabbit and others by Beatrix Potter has enchanted readers of all generations. To celebrate the 150th anniversary of the author’s birth, the Royal Mint released into circulation 50p coins. They feature Potter’s delightful characters. From Peter Rabbit to Mr Jeremy Fisher, these coins are the most sought after amongst coin collectors and Beatrix Potter’s fans. One of those coins features Mr Jeremy Fisher.

Who is Mr Jeremy Fisher?

Mr Jeremy Fisher is a frog from the Tale of Mr Jeremy Fisher by Beatrix Potter. In the tale, the character lives in a slippy sloppy house by the pond. The frog loves to get his feet wet, and he never catches a cold. On a rainy day, Mr Jeremy Fisher goes fishing for minnows. He has a little red float where he sits cross-legged with a stalk of grass as his rod and horsehair as the line.

Hours pass without a nimble, but later, a stickleback named Jack Sharp takes a bite. Mr Jeremy Fisher pricks his finger on Jack’s spines. As Jack escapes, little fishes come to the surface and laugh at Mr Jeremy Fisher.

The Tale of Mr Jeremy Fisher pays homage to the leisurely summers her parents and friends spent sport fishing in Scotland. After Beatrix Potter’s death, various firms received licenses to produce her characters. They released plush toys and other merchandise depicting the characters.

When Was the Jeremy Fisher 50p Coin Released?

The Royal Mint released the Mr Jeremy Fisher 50p coin in circulation in 2017 following the success of the 2016 series. As the first and only official coin to feature Mr Jeremy Fisher in the UK, it’s finished to Brilliant Uncirculated standard. Presented in a fold-out case, the coin includes quotes from Potter’s original tales.

There are 15 coins from Beatrix Potter’s collection featuring her delightful characters. Peter Rabbit is the only character from Potter’s tales to feature more than once in the 50p series. In fact, the Royal Mint released five coins to celebrate the popular rabbit.

How Many Jeremy Fisher coins are in Circulation?

There are 9.9 million Mr Jeremy Fisher 50p coins in circulation. On the reverse, the coin features Mr Jeremy Fisher alongside the inscription of his name. Designed by Emma Noble, the character is in his famous waterproof mackintosh.

The coloured version of the 50p coin features Mr Jeremy Fisher in a red jacket with the character’s face in light green and yellow. The Royal Mint selected Noble to design all Beatrix Potter’s coins. She took great care to feature the original illustration of the author.

The obverse features a portrait of Her Majesty Queen Elizabeth II by Jody Clark. On the obverse, you’ve the following inscriptions – FIFTY PENCE and ELIZABETH II.D.REG.F.D.50 PENCE.2017. Like other 50p coins from Beatrix Potter’s collection, it’s made of cupro-nickel and weighs 8 grams. The Brilliant Uncirculated coin has a diameter of 27.30 mm with seven sides.

How Much Is the Mr Jeremy Fisher 50p Worth?

Coin collectors usually assess the coin’s value. If it’s in good condition, the coin could fetch more than £100 on eBay and other online marketplaces.

What Is the Value of the Mr Jeremy Fisher 50p?

The coin has a low mintage of 9.9 million, which means its value will increase sometime in the future. To know how much the Mrs Tittlemouse 50p is worth, we recommend that you keep checking the eBay UK sold pages.

Where Can You Sell the Mr Jeremy Fisher 50p Online?

There are several online platforms where you can sell your Mr Jeremy Fisher 50p coin. They include:

Unlike eBay, where users pay a listing fee, other sites such as Facebook Marketplace and CoinForSale.com do not charge a listing fee. The good news is that eBay has 22 million active users in the UK. This means you can get several bids selling your coins at high prices.

For a coin with small marks but with the original shine, it can fetch more than a damaged coin. So if you have a Mr Jeremy Fisher 50p Coin, keep it. The commemorative coin will one day go for more than £350.

15 Second Hand BookShops in London you Need to Visit