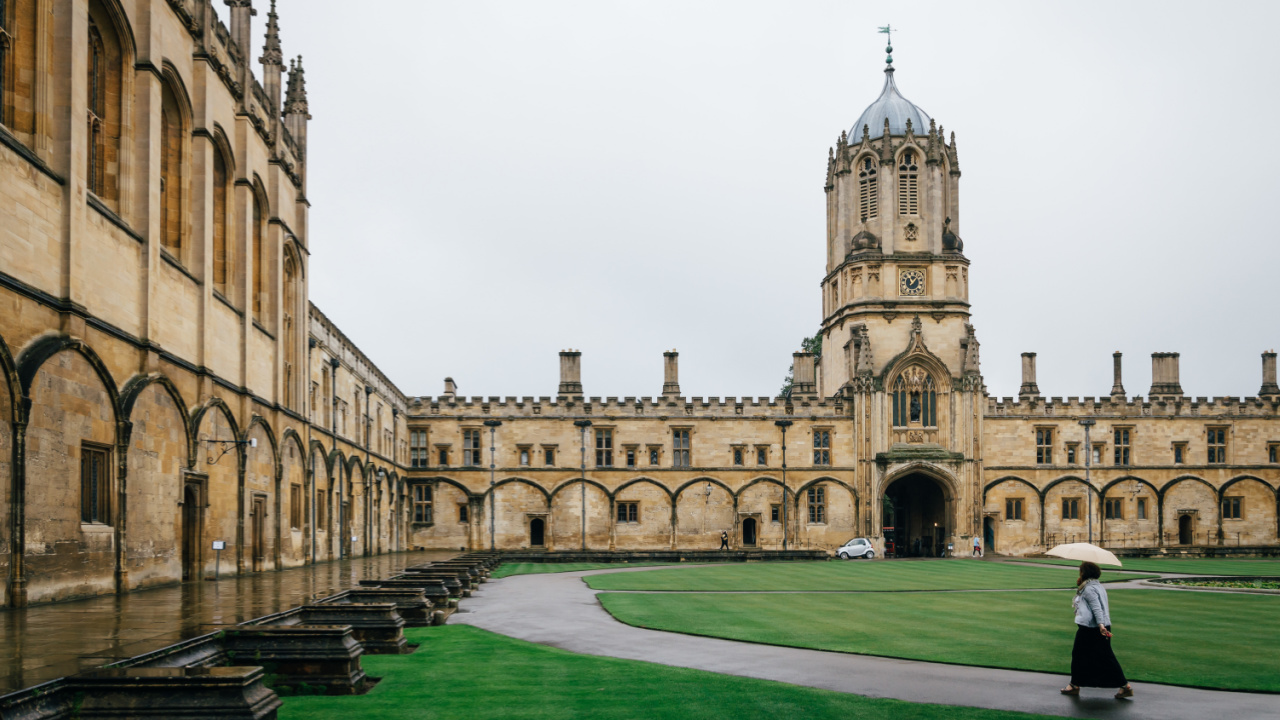 Harry Potter Filming Locations you can visit in Oxford

Fans of Harry Potter visiting London should know there is plenty to see just outside the city. A bus ride or a short train journey to Oxford will enable you to see Harry Potter’s filming locations. You’ll also get to see where producers got their inspiration for different scenes in the film. 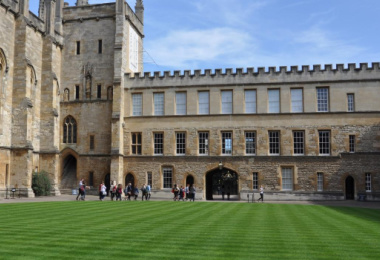 New College, Oxford is one of the constituent colleges of the University of Oxford. Founded in 1379 by William Wykeham, the full name of New College is the College of St Mary of Winchester. Situated at the heart of the city, it is one of the most architecturally striking colleges in Oxford. This explains why it featured in Harry Potter’s films.

In fact, the Cloisters at New College, Oxford are instantly recognizable. These cloisters appear in the fourth Harry Potter film. They feature where Barty Crouch Junior, disguised as Mad Eye Moody, turns Draco Malfoy into a ferret. He transfigured Malfoy after he (Draco) tried to cast a dark charm at Harry Potter behind his back in front of many students.

The New College also appears in Harry and the Goblet of Fire in the scene where Harry pushes through students wearing “Potter stinks” badges.

Besides the cloisters, the New College features arched stone tunnels and imposing architecture. Since New College is at the heart of the city, its central location offers access to all departments. It also has a rich cultural, musical and sporting life. Two minutes from the college is the Clore Music Studios, where the New College Choir hosts its music practice.

Entry to New College is free if touring all Harry Potter locations during the winter months. However, if you visit during the warmer months, you have to buy an £8 ticket for adults. 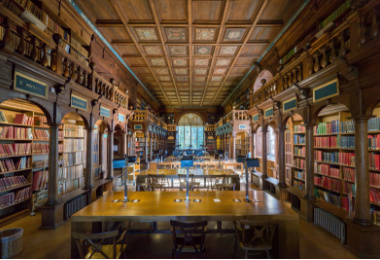 Opening Hours: 10am to 5pm daily

This is one of my favourite film locations in Oxford. The location appears throughout four of the films as Hogwarts Infirmary. It is also the location where Professor Minerva McGonnagal, played by Maggie Smith, taught students how to dance.

The Bodleian Library is the main library at Oxford University. Open to all students and subjects, it’s one of the largest libraries in the world, second to the British Library. Inside the Bodleian Library, you’ll find several smaller libraries, but none is more special than the Duke Humfrey’s Library.

This library section featured in the Harry Potter films as the restricted section of the Hogwarts Library. In fact, in Harry Potter and the Philosopher’s Stone, we see Harry creeping around the corridors in his invisibility cloak.

The Bodleian Library dates back to the 15th century. As the main research library in Oxford University, it derives its name from Sir Thomas Bodley, its founder. It has over 13 million printed items and three reading rooms – Upper Reading Room, Lower Reading Room and Duke Humfrey’s Library.

The library’s books are old and delicate. As such, they’re alarmed. If you touch them, guards are usually alerted. You can book 30 minutes or a 60-minute library tour. Available daily, the 30-minute tour is £9 per person, while the 60-minute tour is £12 per person. Suitable for ages 11+, the tours are in English, and you can book tickets in advance online. 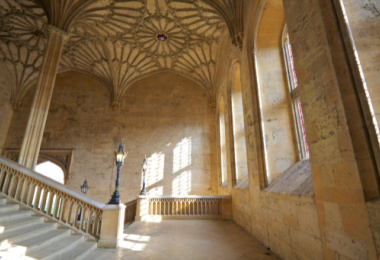 These iconic steps appeared in several Harry Potter films. But they are famously known for the grand arrival of Hogwarts students on their first day.

In Harry Potter and the Philosopher’s Stone, you can see Professor McGonagall standing at the top of the stairs. She taps her fingers as she awaits new students to enter. It’s at this location where she briefs the new students about the Sorting Ceremony in the Great Hall.

This is also the same staircase where at the end of the film, our favourite trio returns after defeating Voldemort. In the Chamber of Secrets, the bottom of the stairs is the spot where Ron and Harry get collared by Argus Filch after their escapade with the flying car.

These elegant stairs have also appeared in other film and television projects, including Lewis. As you ascend the stairs, you’ll note the marking on the doorways – No Peel graffiti. This is not a response to anything served at the hall. But it was a protest at Robert Peel’s potential re-election.

Book your tickets online. Tickets are usually released weekly. Visitors can book a maximum of 11 tickets per order. 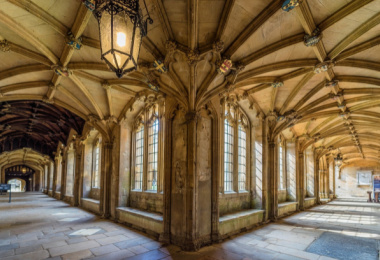 Another constituent college of Oxford University is Christ Church. As the cathedral of the Oxford Diocese, it serves as a chapel for the college. The dean is the ex officio of the college head.

Founded in 1546 by King Henry VIII, Christ Church is not only one of the largest colleges of Oxford University. It’s also among the wealthiest colleges. The college has several architecturally significant buildings, including the Tom Tower. You also have the Tom Quad and the Great Dining Hall where the parliament, assembled by King Charles I, sat during the English Civil War.

Visitors need to book all their tickets in advance online. Charges are:

Since Christ Church is a working institution, the Cathedral and Hall may be closed during your visit. 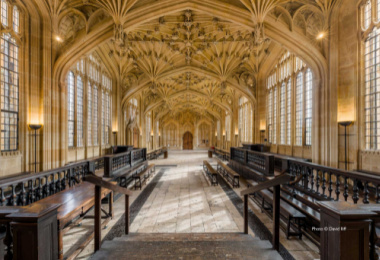 The Divinity School is a medieval room and building in Oxford, England. As part of Oxford University, they built it between 1427 and 1483. As the oldest surviving purpose-built building for university use, it’s used for oral exams, and lectures.

The ceiling consists of lierne vaulting with bosses. In fact, there are 455 of them, and William Orchard designed them in the 1480s. The Divinity School is physically attached to the Bodleian Library. Once you’re done touring the library, visit the Divinity School.

This iconic building features in the Harry Potter films as the Hospital Wing at Hogwarts. In fact, the gothic vaulted ceiling appeared in Harry Potter and the Philosopher’s Stone. The Hogwarts Infirmary was on one side of the Quad and at the end of the hospital corridor. On the fourth floor of the tower was Hogwarts school matron office and Hospital Wing.

Harry Potter visited the Hospital Wing six times. This is because he needed healing for himself as a student at Hogwarts. He also visited the hospital several times while visiting one or more of his friends recuperating there.

Entry to Divinity School is £2.50 per person and you need to book a ticket online for your 15-minute time slot. 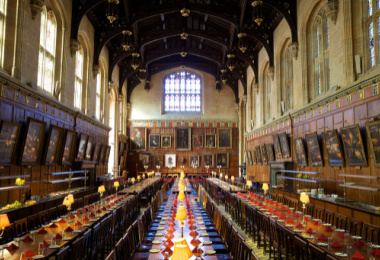 The Christ Church Great Hall was the great inspiration for Hogwarts Great Hall. This is the dining hall where the Sorting Ceremony occurs and where students dine every evening together with their teachers. If you noticed, there are no kitchens at Hogwarts.

The actual dining hall scenes in Harry Potter films were actually filmed at Leavesden Studios. They recreated the Christ Church Great Hall and also took inspiration from the long tables and portraits. You also have the vaulted ceiling at the Great Hall that evokes an ambience of Hogwarts.

Like other Christ Church Harry Potter film locations, you need to visit as part of a tour. Check the opening and closing times when you book as the Christ Church dining hall is not included on the tour.

We have included links to various locations that you will tour around the university. Before you go, check to know the specific hours they are open to the public. It’s crucial to book your tickets in advance online. Accommodation is available around Oxford, and you can also stay in many university’s outside term time.

The Best Hotels in Lowestoft Suffolk

The Best Suffolk Holiday Parks and Resorts Time to get out and explore Suffolk. As…